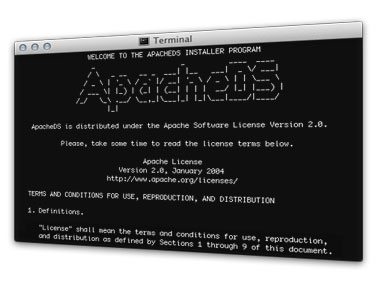 While developing a relatively large application, we required a single sign-on authentication. After a brief investigation about what open source solutions there are we decided that we go for the ApacheDS LDAP authentication. I don’t usually do this, I’m not hater, but take this warning from me: stay away from ApacheDS!

What is ApacheDS? It is an open source directory server developed under the Apache Foundation. To be honest, being mainly a Java programmer I have to say that I’m very happy with all most of the solutions found under Apache.

I started using ApacheDS around a year ago, but little did I suspect what was going to happen.

We deployed version M11 of ApacheDS for one big client we had (around 15,000 users). This was part of a bigger project in which the LDAP integration was about 10%.

We had a portal and we used ApacheDS LDAP authentication in front of that. Since the installation out of the box was pretty simple for ApacheDS, we just deployed it on the server and did not give it a second thought.

Initial tests for importing user information went smooth, however we only tested batches of 10-20 users at a time. We then moved to importing larger batches, and we did notice that after about 500 users we started getting errors upon trying to add more. Well, restarting ApacheDS seemed to be the solution, so we did that a couple of times. However, after a couple restarts we got to about 3-4000 users imported it stopped working even after restart.

Even more, some of the data already in the system seemed to be corrupted. The corruption of data made it such that you could not find a user by searching for it, you could not delete it, and even more frustrating, while trying to add the same user you got a duplicate entry error.

We scratched our heads, and started again from 0. In the mean time version M12 came out, so we decided to go for that. We also found documentation indicating that there are some cache settings that need to be incremented, so we did that. Things seemed to be OK.

Since we were pushing towards the deadline for our project and things seemed to have been resolved, we went ahead and imported all 15000 users, with “only” one restart required.

A month or two into using the application, in which aprox. 50-60 insert/update operations have been done in the ApacheDS LDAP directory, and we had data corruption again, with all sorts of misleading error messages. We had no choice but to restore from our backups. We also updated to the latest version which at the time was M17, and hoped for the best.

Just a few more months later into the use, with no significant addition of user entries, we did not encounter any more problems. However, when our client acquired a new company and it was necessary to input new employees as users in the system all sort of bad things started to happen. Once every 50-60 user entries the system stopped accepting any more entries, and the last entry put in became corrupted. The error that we got looked something like:

Well, that was that, just a few kicks in the back later from the boss and the client we knew we have to make a decision, whether to keep using ApacheDS with all this pain in the neck or to choose a different LDAP solution.

First we did a quick upgrade to the latest version (again) which in only one year it came from version M11 to M20. We still got the same problem, so we decided to contact the ApacheDS support about this. Their answer was SHOCKING… read below my message and their answer:

WOW! What?!!? So, this means that this solution actually doesn’t work because the back-end  is funky and changing it is really hard. Also, no people on it…

I know it’s an open source solution, and cannot ask the moon from it, but the obvious fact is that ApacheDS DOES NOT WORK!

Just if you are wondering, we did switch to OpenLDAP, which was very straight forward to install on Ubuntu, but on Centos it was NOT (took us about a day and a half). So far, no problems.