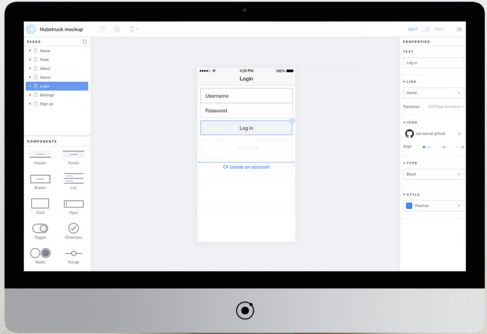 Ionic recently announced that they rolled out Ionic Creator – an online mobile app builder tool which allows you to build mobile apps using drag and drop. The tool is free and the result can be downloaded as a zip file containing the Ionic project, you can use it as a startup template for your projects using ionic-cli and you can also preview the app either online or on mobile.

For over a year I’ve been a happy user of the Ionic framework. I’ve used it in developing 5 mobile applications which I’ve deployed on Android and iOS. The Ionic community and development team are very active and they keep coming with very useful additions to the framework.

Ionic Creator is one of the latest additions and it’s a very good start for an online visual designer for mobile UIs. This gives you the ability to do rapid prototyping with a reusable result.

How does Ionic Creator work?

For sure it’s better to find that out by actually trying it. It’s a drag-and-drop tool for designing mobile UIs. You start by choosing one of 4 options for the type of UI templates:

Inside the creator you can define pages (or views) which can be navigated to via the buttons or tabs placed in the UI.

You can drag and drop a number of ionic controls including lists, cards, buttons, HTML headings, input controls, etc. and You also have the possibility of dragging and dropping an HTML control, where you are able to key in custom HTML content.

After you design the UI you can preview the result.

I will for sure be using this feature from Ionic and I hope that you found this post useful and decide to go for Ionic Creator too.