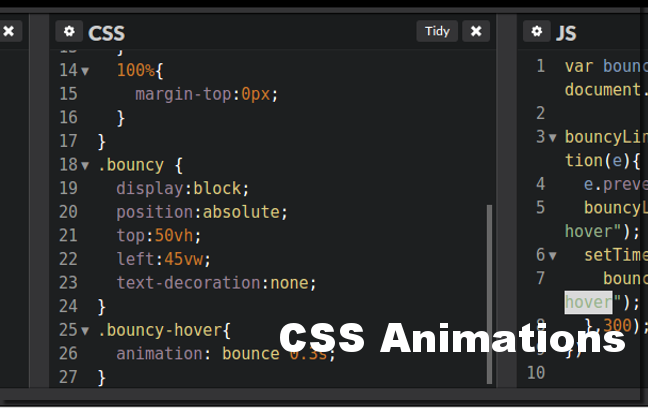 In this short post I would like to show you how to create CSS3 animations. For this I will assume that you have some basic knowledge about HTML and CSS. This should not take more than 5 minutes to read and after reading it you should know almost everything you need for creating your own CSS animations.

A CSS animation actually takes one or more CSS style attribute value of an HTML element and varies it over time resulting in the element to look like it’s animated.

The very basic of CSS animation is done using the transition style attribute. This is used to indicate which CSS attribute of an element you want to modify (animate) and how long should the transition take. Let’s see a simple example:

The second thing I want to point out here is that I have indicated that the transition only applies to the margin-top attribute. I also have the option to indicate multiple attributes by comma separating them (eg. transition: margin-top .3s, font-size .5s;) and I can even indicate that I want to transition all attributes (eg.  transition: all .3s;).

Now that we know about transitions, let’s go further and modify the previous example a bit. Let’s activate the transition when the link is clicked. To do that we will add a click listener and toggle the bouncy-hover on the link element. Toggle means that if the element has the class when it’s clicked then it will remove the class, if it doesn’t have it, then it will add that class.

So, when you click the link it goes up 20 px. Click again and it goes back to the original position. That looks pretty nice, but since I named the class bouncy, I would really like to have the link bounce. To do that we need to define an animation.

So, first of all I defined an animation called bounce using the @keyframes element. The bounce animation starts at 0%, moves the link up by 20px at 50%, and then bounces back, but overshoots the original position to add to the bounce effect.

The second thing I did was to add the newly created animation to the bounce-hover class. This was done by adding an animation attribute with the name of the animation and the duration.

Lastly, I pulled one trick in the JavaScript code. When the link is clicked the bounce-hover class is added to the link and then in 300ms (the same as the .3s animation duration) the class is removed. I had to do this because otherwise the link would have bounced only once out of 2 times.

I hope you found this CSS animation tutorial useful. As always if you have any questions or remarks please don’t hesitate to drop me a comment below.