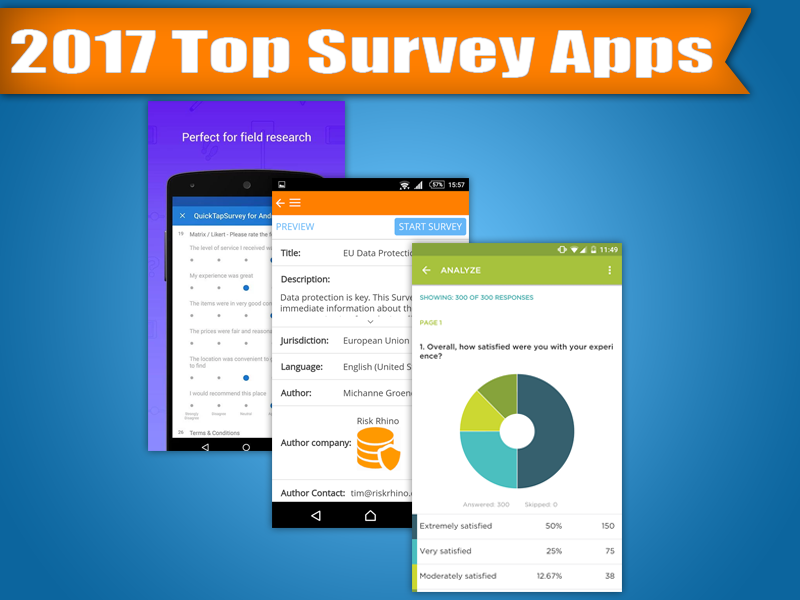 In this post I will take a look at the best 2017 survey apps for mobile that are currently available. Survey apps are very useful for collecting and analyzing data by the use of surveys (accepted terminology also calls them forms or questionnaires) – list of questions with single or multiple choice answers. I’ve scored the apps for several criterias: number of users, general user experience, user rating and content provided. The score is highly subjective however it will give you an indication on the overall value of the survey apps.

One of the most used and most known survey app, is not necessarily the best. However it has about 25 million users (if you include the users of the web application), so if you want to go with the crowd, this is the app to use. You can create surveys using an online survey builder and get the results in the form of reports.

● Create a survey from scratch or choose a custom template
● Send your survey out through email, text, or social networks
● Filter, compare, and analyze your results in real time
● Display your data in different charts and tables
● Protect your data with HIPPA-compliant features and SSL

RiskRhino is a relatively new player on the survey apps scene. They do a great job though and bring a slick application for business surveys in particular. The important thing to note is that Risk Survey focuses on identifying risks in small and large organizations by the use of surveys. The survey app offers predefined and targeted surveys for areas like:

Also important to note is that the predefined content is vetted with RiskRhino’s prestigious partners that include big four accounting firms, law firms, IT consultants, etc.

The Avius Surveys App is a gateway to real-time feedback through simple interactive custom built surveys. Once downloaded to a device, bespoke surveys allow you to utilise the device in a mount for kiosk style surveys or hand held for face to face surveys to conduct your customer research on-site. Using a combination of images and text the survey interface can be customised to blend with your existing brand.

QuickTap Survey App is a nicely designed app and offers the possibility of creating surveys. You need to sign up on their website to create surveys. One downside is that predefined content is scarce.